NTA has been changed the pattern of UGC NET Exam from December 2018. The NET exam was conducted on different dates with 2 shifts. Here, we are going to publish ONE SET of Paper 1.

1. Which among the following is best advantage of Choice Based Credit System (CBCS)?
a. Improving classroom attendance
b. Helping teacher to complete syllabus on time
c. Shift in focus from teacher-centric to student-centric education
d. Reducing examination anxiety among students
Answer: c

2. Which among the following is the best field of study to improve the ability of students to experiment and analyze?
a. Economics
b. Languages
c. Science
d. History
Answer: c

7. Among the following which one is not an instructional material?
a. Youtube video
b. Printed study guide
c. Audio podcast
d. Overhead projector
Answer: c

8. Suppose as a teacher you are training your students in public peaking  and debate. Which among the following is most difficult to develop among the students?
a. Control over emotions
b. Concept formulation
c. Using/Selecting appropriate language
d. Voice modulation
Answer: a

Read the following passage carefully and answer questions 11 to 15:

Singapore has long advocated for India to take up its role as an integral part of the region. It is gratifying to see how Asean – India relations have grown during the past 25 years. In 1991, when the Cold War ended and India began its economic liberalization, Singapore saw an opportunity to deepen ties and build on its historical and cultural links with the Asian region. Singapore pushed for India tobecome a full Asean dialogue partner in 1995 and join the EAS in 1995 and since then, Asean – India ties have strengthened. All in all, around 30 platforms for co-operation exist, including seven ministerial dialogues and the Annual Leader Summit. However, there is scope for more and it is a must. For instance, there are tremendous opportunities in enhancing physical and digital connectivity between India and Asean. Asean is committed to strengthening land, air and sea linkages with India. These linkages will enhance people-to-people flows, as well as boost business, investment and tourism. Hie lndia-Myamnar-Thailand trilateral highway will connect India’s Northeast to mainland Southeast Asia. While one can fly directly between India and several Asean countries, there is still much room to expand air links to support growing business and tourism. Beyond physical linkages, digital connectivity is the new frontier in the Fourth Industrial Revolution. India has made great progress in innovation, Start-ups and digital inclusion. There are opportunities to apply initiatives such as Aadhaar in our region. E-commerce and FinTech are two other areas of potential collaboration. As an economic hub, Singapore can serve as a springboard to launch these ideas to Southeast Asia and beyond. India’s role in Asean should be anchored by growing economic ties with Singapore. The economic integration involving 16 countries with one-third of global GDP and trade will create an integrated Asian market.

11. What is needed to encourage tourism between India and Asean?
a. innovation
b. Waterways
c. Start-ups
d. Air links
Answer: d

13. What prompted Singapore to opt for stronger ties with India?
a. Economic liberalization in India
b. Geo-political equations
c. End of Cold War
d. Historical past
Answer: a

14.Who can be India’s launch pad for an integrated Asian market as per the passage?
a. Thailand
b. Singapore
c. Southeast Asia
d. Myanmar
Answer: b 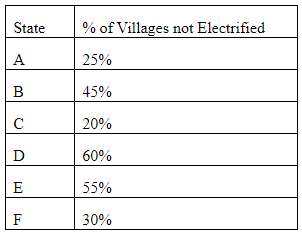 33. Which State has twice the percentage of electrified villages in comparison to State D?
a. State C
b. State A
c. State B
d. State D
Answer: a
Data Interpretation: 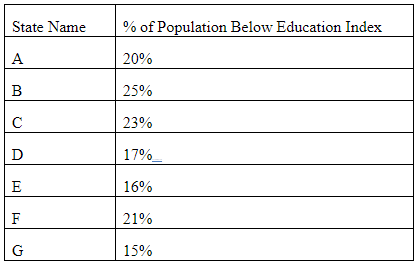 38. In which part of India, the tropical Western Ghats are situated?
a. Gujarat
b. Punjab
c. Kerala
d. Rajasthan
Answer: c

39. The University Grants Commission has a scheme for “Human Rights and Values in Education”. Under this scheme, which statement is incorrect among the following for ‘Human Rights and Duties Education’ component?
a. To develop interaction between society and educational institutions.
b. To encourage research activities.
c. To establish value and wellness centers in schools.
d. To sensitize the citizens so that the norms and values of human rights are
realized.
Answer: c

40. Natural vegetation of an area needs to be preserved for the future,
mainly for the purpose of:
a. Providing habitat for birds
b. Providing material for breeding new species
c. Study by scientists
d. Preventing soil erosion
Answer: b

41. A source of renewable power which can be developed with minimum cost is:
a. Geothermal energy
b. Biomass power
c. Windmills
d. Tidal power
Answer: b

48. A small text file stored on user’s computer by some websites in order to recognize and keep track of user’s preferences is called:
a. Log
b. History
c. Report
d. Cookie
Answer: d

50. The annual range of temperature in the interior of the continents is high compared to coastal areas. What is/are the reason(s)?
a. Thermal difference between land and water.
b. Variations in altitude between continents and oceans.
c. Presence of strong winds in the interior.
d. Heavy rains in the interior as compared to the coastal region.
Code:
1. (a) and (b) only
2. (b) and (c) only
3. (a) only
4. (a), (b), (c) and (d)
Answer: 3