Note: • This paper contains Fifty (50) multiple-choice questions, each question carrying two (2) marks.
• Attempt all of them.

1. Verbal guidance is least effective in the learning of:
(A) Aptitudes
(B) Skills
(C) Attitudes
(D) Relationship
Answer: (B)

3. The most appropriate purpose of learning is:
(A) personal adjustment
(B) modification of behaviour
(C) social and political awareness
(D) preparing oneself for employment
Answer: (B)

4. The students who keep on asking questions in the class should be:
(A) encouraged to find answer independently
(B) advised to meet the teacher after the class
(C) encouraged to continue questioning
(D) advised not to disturb during the lecture
Answer: (A)

6. Generalised conclusion on the basis of a sample is technically known as:
(A) Data analysis and interpretation
(B) Parameter inference
(C) Statistical inference
(D) All of the above
Answer: (A)

7. The experimental study is based on:
(A) The manipulation of variables
(B) Conceptual parameters
(C) Replication of research
(D) Survey of literature
Answer: (A)

8. The main characteristic of scientific research is:
(A) empirical
(B) theoretical
(C) experimental
(D) all of the above
Answer: (D)

9. Authenticity of a research finding is its:
(A) Originality
(B) Validity
(C) Objectivity
(D) All of the above
Answer: (C)

Read the following passage and answer the questions 11 to 15:
Gandhi’s overall social and environmental philosophy is based on what human beings need rather than what they want. His early introduction to the teachings of Jains, Theosophists, Christian sermons, Ruskin and Tolstoy, and most significantly the Bhagavad Gita, were to have profound impact on the development of Gandhi’s holistic thinking on humanity, nature and their ecological interrelation. His deep concern for the disadvantaged, the poor and rural population created an ambience for an alternative social thinking that was at once far-sighted, local and immediate. For Gandhi was acutely aware that the demands generated by the need to feed and sustain human life, compounded by the growing industrialization of India, far outstripped the finite resources of nature. This might nowadays appear naive or commonplace, but such pronouncements were as rare as they were heretical a century ago. Gandhi was also concerned about the destruction, under colonial and modernist designs, of the existing infrastructures which had more potential for keeping a community flourishing within ecologically-sensitive traditional patterns of subsistence, especially in the rural areas, than did the incoming Western alternatives based on nature-blind technology and the enslavement of human spirit and energies.
Perhaps the moral principle for which Gandhi is best known is that of active non-violence, derived from the traditional moral restraint of not injuring another being. The most refined expression of this value is in the great epic of the Mahabharata, (c. 100 BCE to 200 CE), where moral development proceeds through placing constraints on the liberties, desires and acquisitiveness endemic to human life. One’s action is judged in terms of consequences and the impact it is likely to have on another. Jainas had generalized this principle to include all sentient creatures and biocommunities alike. Advanced Jaina monks and nuns will sweep their path to avoid harming insects and even bacteria. Non-injury is a non-negotiable universal prescription.

11. Which one of the following have a profound impact on the development of Gandhi’s holistic thinking on humanity, nature and their ecological interrelations?
(A) Jain teachings
(B) Christian sermons
(C) Bhagavad Gita
(D) Ruskin and Tolstoy
Answer: (C)

12. Gandhi’s overall social and environmental philosophy is based on human beings’:
(A) need
(B) desire
(C) wealth
(D) welfare
Answer: (A)

13. Gandhiji’s deep concern for the disadvantaged, the poor and rural population created an ambience for an alternative:
(A) rural policy
(B) social thinking
(C) urban policy
(D) economic thinking
Answer: (B)

15. Gandhi’s active non-violence is derived from:
(A) Moral restraint of not injuring another being
(B) Having liberties, desires and acquisitiveness
(C) Freedom of action
(D) Nature-blind technology and enslavement of human spirit and energies
Answer: (A)

Questions 22 to 24 are based on the following diagram in which there are three interlocking circles I, S and P, where circle I stands for Indians, circle S for Scientists and circle P for Politicians. Different regions in the figure are lettered from a to f 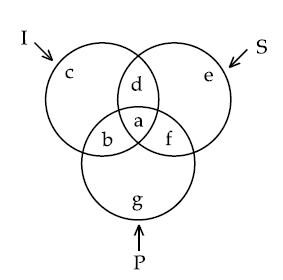 26. The function of measurement includes:
(A) Prognosis
(B) Diagnosis
(C) Prediction
(D) All of the above
Answer: (D)

41. Deforestation during the recent decades has led to:
(A) Soil erosion
(B) Landslides
(C) Loss of bio-diversity
(D) All the above
Answer: (D)

42. Which one of the following natural hazards is responsible for causing highest human disaster?
(A) Earthquakes
(B) Snow-storms
(C) Volcanic eruptions
(D) Tsunami
Answer: (D)

43. Which one of the following is appropriate for natural hazard mitigation?
(A) International AID
(B) Timely Warning System
(C) Rehabilitation
(D) Community Participation
Answer: (B)

44. Slums in metro-city are the result of:
(A) Rural to urban migration
(B) Poverty of the city-scape
(C) Lack of urban infrastructure
(D) Urban-governance
Answer: (A)

45. The great Indian Bustard bird is found in:
(A) Thar Desert of India
(B) Coastal regions of India
(C) Temperate Forests in the Himalaya
(D) Tarai zones of the Himalayan Foot
Answer: (A)

46. The first Indian Satellite for serving the educational sector is known as:
(A) SATEDU
(B) INSAT – B
(C) EDUSAT
(D) INSAT-C
Answer: (C)

47. Exclusive educational channel of IGNOU is known as:
(A) GyanDarshan
(B) Cyan Vani
(C) DoorDarshan
(D) Prasar Bharati
Answer: (A)