It is an important topic in reasoning, especially for UGC NET Paper 1. In series completion, the term follows a certain pattern throughout. The candidate is required to identify the pattern either to complete the given series with the most suitable option or to find the wrong or missing term in the series.

There are three types of series completion:

In this of series completion, you have to find out the next or the wrong or the missing number in the series, which follows a particular pattern.

Alphabet series consists of alphabets placed in a specific pattern. If you keep in your mind the order of the alphabet with their respective position (number), it will help you answer the questions quickly. We all know that the total alphabets are 26.
We can arrange in ascending and descending order, like

Ans: (c). In each term, the first letter is moved two steps forward, the second letter one step backward, and the third letter one step forward to obtain the corresponding letter of the next term. So, the missing term is JGW.

This type of question usually consists of a series of small letters that follow a certain pattern. However, some letters are missing from the series. The candidate is required to choose this alternative as the answer.

A code is a system of signals. Therefore, coding is a method of transmitting messages between the sender and receiver without any knowledge of a third party. The Coding-Decoding test is set up to judge the candidate’s ability to decipher the law that codes a particular message and break the code to reveal the message.

LETTER CODING
In this type of reasoning, the letters are coded in another letters and we have to find out the pattern. After finding the pattern, we have to ask to identify the code for the given letters.

In the given code, each letter is moved three steps forward than the corresponding letter in the word. So R is coded as U, A as D, C as F, E as H. Hence (c) is the answer.

In these questions, artificial or code values are assigned to a word or a group of words and the candidate is required to find out the original words.

E.g: If in a certain language FLOWER is written as EKNVDQ, what will be written as GNTRD?

Thus, HOUSE is written as GNTRD, So the answer is (d)

A person who is related to another by birth rather than by marriage.

Blood relations of a group of persons are given in jumbled form. In this type of reasoning, the success of a candidate depends upon knowledge of the Blood Relations, some of which are summarised below. The questions which are asked in this section depend upon Relation.

To remember easily the relations may be divided into two sides as given below:

Relations of Paternal side:

Relations of Maternal side:

Relations from one generation to next: 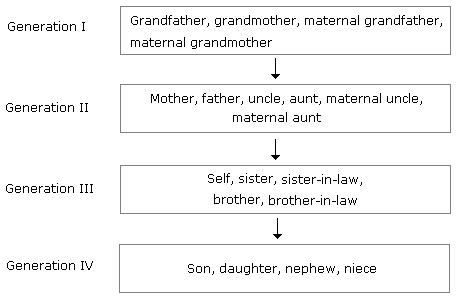 Examples: Pointing to a photograph of a boy Suresh said, “He is the son of the only son of my mother.” How is Suresh related to that boy?

a) Brother    b) Cousin     c) Uncle       d)Father
Answer: D
Explanation: The boy in the photograph is the only son of the son of Suresh’s mother i.e., the son of Suresh. Hence, Suresh is the father of boy.