Arguments: An argument is a set of statements, one of which, the conclusion is taken to be supported by the remaining statements,  the premises.

For example;
Premises:        All men are mortal
Socrates is a man
Conclusion:    Socrates is mortal

There are three types of Arguments:

Example:
Premises:        All men are mortal
Socrates is a man
Conclusion     Socrates is mortal

An argument where the premises point several cases of some pattern and the conclusion states that this pattern will hold in general.

In the above example, we have seen just 1000 swans (not all in the world), and all of them have been white. But it does not mean that all swans in the world are white. White swans are a case of a pattern in those particular circumstances.  Hence, we have concluded in general that all swans are white. But it might not be true actually. This type of arrangement of premises and conclusion is an example of an Inductive argument.

A proposition is simply a claim about the world that has truth value.  Every proposition can be expressed as a declarative (i.e., not a question or command) sentence.

For a any categorical proposition, there are four components:

Particular: ‘Some’ (includes part of a class)

Each categorical proposition has both quantity and quality properties. The followings are the properties:

There are four types of categorical position:

An universal affirmative proposition can be written as: All S is P

S and P represent  the  subject and predicate terms, respectively.  Such a proposition  affirms that  the  relation  of  class  inclusion holds between the two classes and says that the inclusion is complete, or universal.

Systematically, Universal Negative proposition can be represented as: No S is P

Such a proposition affirms that the no relation of class inclusion holds between the two classes and says that the exclusion is complete, or universal.

Particular affirmative (I-proposition): The proposition in which at least one members of the subject class is also a member of the predicate class.

Systematically, Particular affirmative proposition can be represented as: Some S is P

Particular negative ( O-proposition): The proposition in which at least one members of the subject class is not a member of the predicate class.

Systematically, Particular affirmative proposition can be represented as: Some S is not P.

A brief of Four Kind of Categorical Proposition

The opposition is an immediate inference grounded on the relation between propositions which have the same terms, but differ in quantity or quality (or both).

The square of opposition shows us the logical inferences (immediate inferences) we can make from one proposition type (A, I, E, and O) to another. Contrary: Universal propositions are said to be contrary because they cannot both be simultaneously true. In other words, the opposition is between two universals which differ in quality. 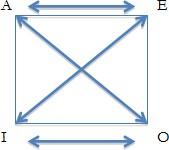 Sub alternation: The universal to particular and particular to universal inferences are called subalternation. In other words, the opposition is between two propositions which differ only in quantity. 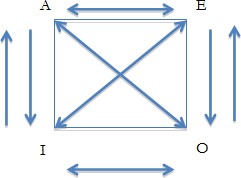 A syllogism is an argument containing two premises and a conclusion.

Mood and Figure of Syllogism

The categorical syllogisms can be categorise as:

When the major premise, the minor premise, and the conclusion of  a categorical syllogism arranage in a series of three letters (A, E, I, or O) corresponding to the type of categorical proposition is called MOOD of an argument.

Thus, the mood of this Argument is AAI.

In another example, to figure out the FORM of the premises and the conclusion in the following example:

Thus, the mood of this Argument is “EIO”.

When you have to determine the mood of a categorical syllogism, you need to find out which of the four forms of categorical proposition each line of the Argument is (A, E, I, or O).

The figure of a categorical syllogism is a number which corresponds to the placement of the two middle terms.

For example, consider the following arguments:

There are four possible figures in the categorical syllogism:

Important Points of Mood and Figures:

There are two kinds of valid argument forms:

Simply, a fallacy is a mistake in reasoning. In other words, a defect in an argument that misleads the mind is called a fallacy. There are two types of fallacy:

Formal Fallacies: A fallacy in which there is the involvement of an error in the form, arrangement, or technical structure of an argument is called Formal Fallacy.

An informal fallacy involves such things as:

Uses of Language in Logic

The followings are three important uses of language:

Informative use of language: It involves an effort to communicate some content or to describe something or to give information about something. When I say a child, “The Second of October is the Gandhi Jayanti.” The language I used is informative.

This kind of use of language presumes that the content of what is being communicated is true, so it will be our main focus in the study of logic.

The first proposition reports that having feather is a feature of a Parrot. The second proposition reports that Parrot do not have some essential qualities found in mammals. In, both cases it provides information about the world.
Two main aspects of this function are generally noted: (1) evoking certain feelings and (2) expressing feelings.
Expressive discourse, qua expressive discourse, is best regarded as neither true or false.

Expressive use of Language: This type of language is often used to express our emotions, feelings, or attitudes. For example: It’s too bad!, It’s wonderful!, etc.

When language is used expressively or emotively, it cannot be characterized as true or false.

Direc­tive uses of language: When the use of language is often to give direction as Commands, requests, instructions, questions etc., to do or not to do something.

Denotation is the dictionary definition or literal meaning of a word only. Not emotions or feelings are associated with the word.

Ex: The teacher walked into the classroom. This example does not have any hidden meaning.  A teacher simply walked into a classroom.

Connotation: A word’s emotional meaning; suggestions and associations that are connected to a word. Words can be positive, negative, or neutral.  Words can also connote specific feelings or emotions.

Persuasive: The purpose of a persuasive definition is to influence people’s attitudes, not to neutrally and objectively capture the standard meaning of a word.
Eg. Teenagers, Abortion etc.

For example, when your chemistry teacher defines water by its chemical formula H2O, he is not trying to increase your vocabulary (you already knew the term water), but to explain its atomic structure.

Accepting a theoretical definition is like accepting a theory about the term being defined. If you define spirit as “the life-giving principle of  physical organisms,” you  are       inviting     others   to    accept   the   idea   that   life   is  some how a spiritual product.